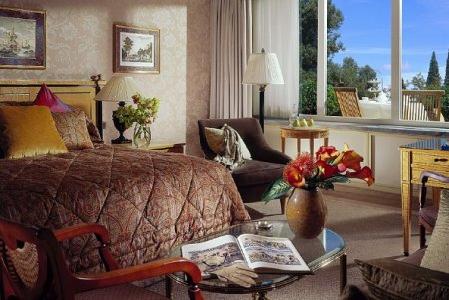 Location
Situated within walking distance of the historic old town of Lisbon, Four Seasons - The Ritz is a landmark hotel enhanced by outstanding contemporary art. Built on one of Lisbon's seven hills, this hotel is a prominent sight and a stunning locale to experience the city.

Rooms
This elegant 10-storey building offers 282 spacious guest rooms and suites, many with balconies overlooking the city. The rooms are all facilitated with a host of modern comforts to ensure you a comfortable stay.

Restaurant
Overlooking the Eduardo VII Park, the Varanda Restaurant is favoured for business lunches and dinners by the city's most sophisticated residents and discerning executives. As one would expect from the hotel's proximity to the ocean, seafood features predominantly on the menu, with caldeiradas and cataplana amongst the rich variety of authentic and diverse Portuguese dishes on offer.

General
Four Seasons Hotel Ritz Lisbon invites you on a journey of relaxation, self-discovery and pampering at its spa. There is also a fitness centre and a swimming pool available onsite for health conscious guests.