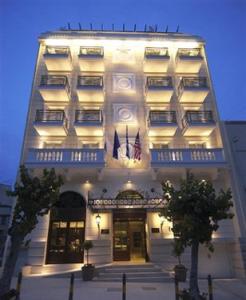 The Hera Hotel offers comfortable accommodation and convenient facilities to make your stay in Athens a pleasant one.

Location
Situated next to the scared hill of Acropolis, the Hera Hotel Athens is just 10 minutes away from the Syntagma Square. Located in an ideal place for all visitors, the hotel is close to the tram, metro station and to the city's commercial centre.

Rooms
The hotel has 38 guestrooms that are comfortable, well furnished and equipped with modern amenities.

Restaurant
The Peacock Restaurant in the Roof Garden and in the ground floor lobby of the hotel has its own special style, offering both national and international specialties.

General
In order to have a business lunch with colleagues of yours or to make a private presentation, or even a small conference, the hotel provides you exclusive business services.