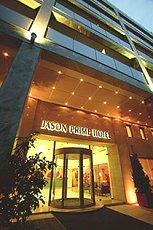 Jason Prime Hotel Athens is located close to the National Theatre and is only 350 metres from the Omonia Metro Station, from where one has easy access to the Acropolis and the Plaka area. The hotel offers 82 comfortable rooms equipped with numerous amenities such as a satellite TV, telephone, in room safe and a private bathroom. Jason Prime also offers a meeting room as well as a restaurant serving American buffet breakfast.