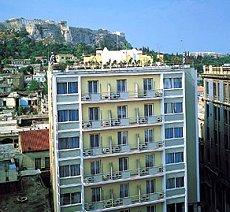 Hotel Plaka is placed on an excellent location, in the heart of Athens, five minutes walk from Syntagma Square. The Acropolis, museums, the Parliament, the shopping area of Plaka as well as the Cathedral are all within walking distance from the hotel. All the bedrooms are beautifully furnished and decorated, having a host of modern amenities including air-conditioning.