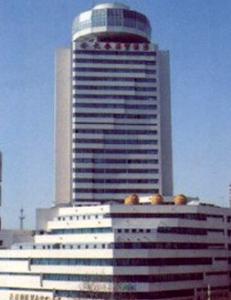 Location
The hotel is located in the heart of the city with convenient public transportation conjunction and easy access to shopping center.

Rooms
The rooms are equipped with all necessary facilities, providing fully convenience for a nice stay.

Restaurant
The hotel boasts several restaurants. And there is a canopy-revolving restaurant, providing a marvelous bird's-eye view while enjoying gastronomic cuisine.