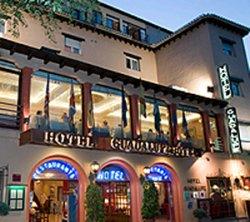 If you are planning for an ideal holiday destination in Granada and Province, the Guadalupe Hotel is a perfect place for you to reside and explore the surrounding areas.

Location
Situated within a 10-minute walking distance from the centre of Granada, Guadalupe Hotel is just 50 metres from the most stunning Arabic monument in Spain, La Alhambra.

Rooms
Guests are offered a choice of 58 comfortable guest rooms that are well furnished and equipped with all modern amenities. The hotel also provides special rooms with additional equipments in order to make your stay a remarkable one.

Restaurant
Guests can relish the taste of most delicious dishes of local gastronomy in perfect harmony with Spanish and international cuisine served at the on-site restaurant. You can also enjoy a fine drink at the bar that serves a variety of cocktails.

General
Respecting the architectural surroundings, and in the purest Granadine Style, the foyer and reception areas of the hotel are well decorated with warm tones, comfortable furniture and inviting decor.