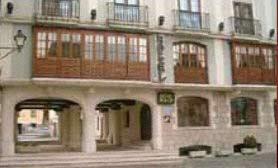 Location
This is probably the best located hotel in Burgos taking into account its proximity to the marvelous Gothic cathedral. It is just a few metres away from the main entrance to the cathedral.

Rooms
The 55 medium sized and welcoming rooms are decorated in a traditional Castillian style with tiled floors, pieces of furniture made of strong dark wood such as bedside cabinets and wardrobes, which create a traditional style. The bathrooms are also completely equipped.

Restaurant
The restaurant is also decorated in a traditional style creating a homely and warm atmosphere where traditional dishes and unbeatable wines are served to the delight of the guest.

General
This is a highly recommended hotel due to its value for money, good service and specially its location which provides unique views from some of the rooms.
The hotel is composed of two little buildings both of them very charming and just 10 metres away from each other.