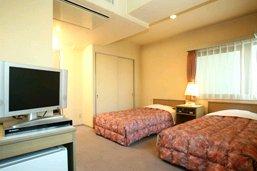 Sky Court Asakusa Tokyo is located in Asakusa, a popular sightseeing area and can be reached by a 10-minute walk from the Asakusa Metro Station. Popular places are located nearby, such as the Sensoji and the Kaminarimon. Also guests may catch the Sumida River Line from the Asakusa Pier, a pleasurable 40 minutes trip on the Sumida River. All the in-house guest rooms are equipped with modern facilities. Sky Road Asakusa restaurant, with a capacity of 36 guests serves Western and Japanese cuisine.