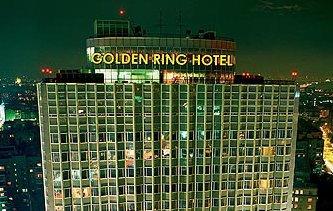 The Golden Ring Hotel is located in the very centre of Moscow, opposite to the Ministry of Foreign Affairs of Russia. The hotel is close to many embassies, representations of foreign companies, Red Square, Kremlin museums and the biggest Exhibition centre. The hotel features 247 spacious guest rooms, which are immaculately furnished and equipped with latest amenities that address the changing needs of its future guests.
The Panorama Restaurant at the hotel offers gastronomic delights while the Garden Cafe serves traditional brunches dedicated to its guests. Other dining options are the Momoyama Restaurant, Diamond Bar and the Stolichny Restaurant. The hotel provides conference rooms, which can be used for presentations, business meetings and banquets. Overall, guests can experience a different world of comfort and pleasure at the Golden Ring.