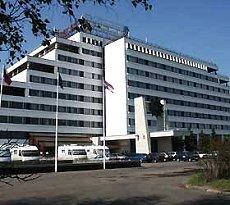 The Rus-Hotel is located in the south of Moscow city. Whether you travel for business or pleasure, or plan a business conference, the hotel will provide everything necessary for your trip to be pleasant and successful. Rus-Hotel offers 187 rooms, all of which are well equipped and comfortably furnished with all modern amenities.
The hotel offers a conference hall, which can accommodate up to 340 delegates. You can enjoy and relax at the bar and restaurant with a full range of drinks and different style of dishes provided at the hotel.