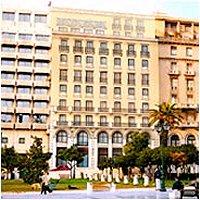 King George II is a deluxe class, traditionally designed and centrally located hotel. It is majestically situated in Syntagma Square, at the very heart of Athens. The ancient and contemporary Athens is within walking distance to the hotel. The Acropolis, Plaka-the old picturesque city, Greek Parliament and the Byzantine Museum, blend with the bustling shopping, business and financial districts.
The 105 guestrooms offered by the hotel are luxuriously designed and most of them face the famous Syntagma Square. Some of the rooms as well offer breathtaking views of the Acropolis and Lycabettus Hill.