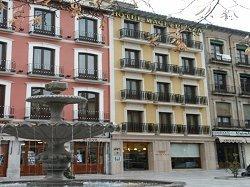 Location
The Macia Plaza Hotel is located in the most central and privileged part of the city, Plaza Nueva. Due to its location and characteristics, it can be considered as a unique offer in town. The location of the hotel is absolutely ideal for sightseeing since all the major attractions of the ancient city are on its doorstep.

Rooms
The hotel has 44 spectacular guestrooms that are comfortable, well furnished and equipped with modern amenities.

General
A combination of the latest technologies and a comfortable atmosphere makes this hotel suitable for both leisure and business stays.