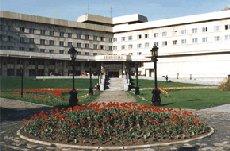 Spacious bright halls, attentive personnel, always prepared to answer any question, all this creates the purely Russian atmosphere of cosiness in combination with the contemporary comfort.

Location
Danilovskaya Hotel is located in Moscow, 4 kilometres from the city centre.

Rooms
The 116 guestrooms are equipped with all the comforts, and of the rooms offer magnificent views of temples and other buildings.

Restaurant
The hotel's restaurant serves Russian cuisine and drinks, along with numerous dishes that are made of ancient monastic recipes. The kitchen, one of the best in Moscow, offers numerous dishes and beverages of the Russian kitchen, prepared on the ancient cloister prescriptions.

General
The hotel features a conference hall that is equipped with facilities for seminars and meetings. The staff will undertake all efforts and cares that your holiday became really unforgettable. Furthermore, recreational amenities include two modern saunas as well as excursion programmes.