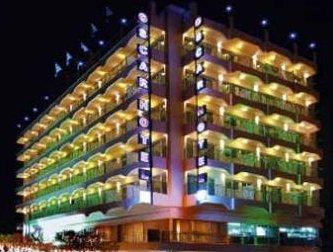 Location
The Oscar Hotel is perfectly placed in the heart of Athens only a few minutes walk from Omonia Square and the Archaeological Museum. The hotel also provides easy access to all ancient sites and other interesting tourist attractions like the Acropolis, Parthenon, Plaka area, Parliament Building and the Olympic Stadium.

Rooms
This luxurious property offers comfortable guestrooms and suites that are tastefully decorated and well appointed with an extensive range of modern conveniences including access to the internet.

Restaurant
Guests can savour on a variety of delectable local and regional delicacies served at the onsite restaurant. You can also enjoy your beverage under the blue sky at the roof garden bar with the dazzling views of Acropolis and the Lycabettus hill.

General
The Oscar Hotel provides fully equipped conference facilities to perfectly suit your business meetings and can cater up to 120 delegates. There is also a swimming pool available onsite for you to enjoy.