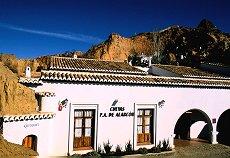 With excellent lodgings, a fine restaurant and conference room, an outdoor pool and other facilities, the hotel says it all with its unique ambience and conveniences.

Location
Cuevas de Pedro Antonio de Alarcon Hotel is a cave complex, located in the area of Guadix, at the entrance of the National Road N-342, between the city and the motorway. The railway station is nearby and city centre is about a kilometre away.

Rooms
The hotel offers 23 apartments, transformed from pre-historic caves into modern living facilities, offering the unique opportunity to experience the primitive charm of a centuries old dwelling. Each cave has beautiful views over the historical city of Guadix and the breathtaking Sierra Nevada, in the background.

General
Meeting rooms has an exquisite decor and diverse commodities and materials, to celebrate business meetings, seminars and other courses. A swimming pool is open during summer time and has shady-places and desk-chairs, to enjoy the sun and relax.