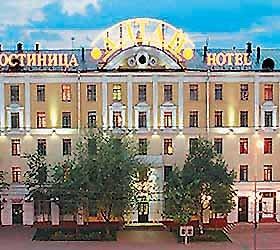 Altay Hotel is located in Moscow, 6 kilometres from the city centre and 7 kilometres from the railway station. In the city, guests can visit the tourist places like Central Botanical Garden, Ostankino Estate Museum and All-Russia Exhibition Centre. The hotel boasts of 400 rooms that are equipped with all the necessary amenities.
The Altay hotel features a business centre and an Internet access. The bar is an ideal place for you to relax or to meet friends and also to enjoy a drink. In the leisure hours, you can play a game of billiards, have fun in the pool or even relax at sauna.