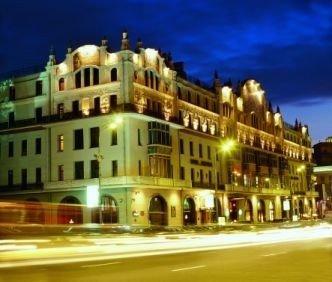 Location
This hotel is situated adjacent to Red Square on Theatre Square very close to the Russian museum. The Kremlin, GUM department store and Bolshoi Theatre are well within walking distance.

Rooms
The hotel has 6 floors consisting of 365 guest rooms, including 76 suites. The rooms are luxuriously decorated in tasteful and traditional styles. The rooms have all up to date technology in a traditional setting. Rooms are in soft pastel pinks and mauves against tasteful printed wallpaper and dark woodwork.

Restaurant
The restaurant is extravagantly fitted out under a huge glass atrium. It is decorated with plush red velvet upholstery against light woodwork.

General
Property offers a pleasant and traditional product with a fantastic location.