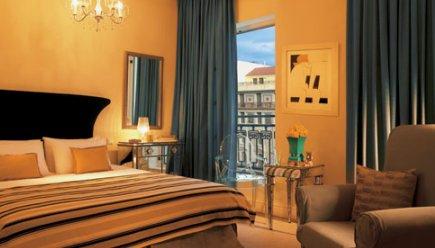 Location
Situated in the heart of Athens , Baby Grand boutique hotel is the perfect hideaway from the bustle of the outside world. This property is located on Kotzia Square and is within walking distance from the city's lively old quarter of Monastiraki and the shopping area.

Rooms
This property offers rooms and suites that are tastefully decorated with exquisite designer fabrics and equipped with several modern amenities. Non smoking rooms and disabled rooms are also available for your convenience.

Restaurant
The on site cafe restaurant offers Greek and Continental cuisine and is open for late night dinner. The Lounge bar situated on the first floor provides delicious snacks and drinks in a cosy atmosphere for its guests to relax.

General
A well equipped meeting room is also available for various business needs. During leisure, you can explore the city and its surrounding areas.