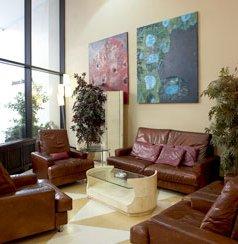 Location
Ideally located on Omonia Square, one of the most famous landmarks in Athens, the Acropol Hotel Athens is set in the heart of business and shopping district. The hotel is within walking distance from the Acropolis, Old City and most of Athens sights and attractions.

Rooms
The hotel offers guest rooms and suites that are tastefully decorated with exquisite designer fabrics and all modern amenities. The hotel also features specially adapted guest room for physically challenged guests and attentive room service for your conveniences.

Restaurant
Spoil yourself with choice at the extensive breakfast buffets found at the Acropol restaurant, which offers unique traditional Greek dishes and international cuisine. You can also enjoy cocktails and elegant snacks at the controversial bar.

General
Whether you plan a conference meeting, a product launch or a seminar, the Acropol Hotel proposes versatile function rooms with audio-visual equipment. A place to unwind after a busy day, the fitness centre offers workout equipment, steam room and a sauna, all in a compact setting.