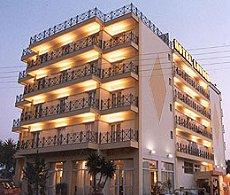 Situated by the seaside, London Hotel is 100 meters away from the beach, in the most beautiful area of Glyfada among plenty of greenery. The hotel is 12 kilometres from the centre of Pireus and a kilometre from Glyfada. The airport is 17 kilometres away from the hotel.
The hotel offers 75 guest rooms, all air-conditioned and equipped with amenities such as television, telephone and mini bar. Featuring a bar and restaurant, meetings and conferences can be held at the hotel.