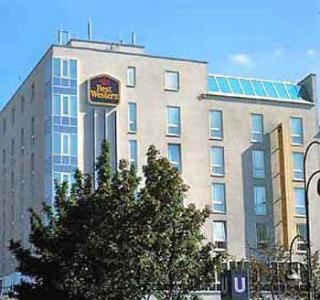 Location
The hotel is located near the city centre on Hermannplatz, a lively area with lots of shops and International restaurants. There is a bus stop in front of the hotel with the tube station just across the road.

Rooms
The rooms are medium in size and kept in good condition. They have been tastefully furnished in a modern style. They have pale wooden furniture with pale green and blue carpets.

Restaurant
The breakfast room is on the top floor, with half the ceiling in glass and a large window creating a winter garden atmosphere. The walls are also painted in orange and the furniture is covered in pale green fabric.

General
The hotel is a very friendly, private hotel.