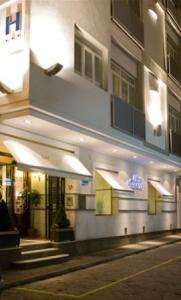 Location
Located in the heart of Granada, the Husa Anacapri Hotel is close to the pedestrian entrance to the Alhambra and Generalife. The hotel is just a short walk from the Carrera del Darro and the Chancilleria. Anacapri provides a soothing atmosphere within the main commercial zone of Granada.

Rooms
In a quite atmosphere, the hotel's 49 rooms are well decorated and equipped with several modern amenities to give the clients all the facilities for a pleasant and relaxing stay.

Restaurant
Guests can start their day with a delicious breakfast served at the breakfast bar. During your stay you can make use of a lounge, bar and cafeteria.

General
The hotel also offers a meeting room for you to conduct your seminars, conferences and other social events.