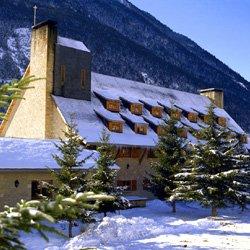 Location
This parador is located in the tourist village of Arties which is in the picturesque part of the Pyrenees called the Aran valley. This area of the Pyrenees of Lerida has a distinct character. It is a natural paradise with abundance of flower trees and little villages.

Restaurant
The typical cuisine of the area is Catalan with a wide variety of dishes. Specialities include "Cocido Aranes (a chickpea stew) and "Trucha Pirenaica"(a trout dish). Other towns of interest to visit in the area are Viella, the capital of the region and the rural market town of Bossost.

General
The parador has also numerous meeting rooms among which t he Salon Chimenea stands out. This parador is found in a unique landscape where the woods, the snow-capped peaks in winter and the freshness of the summer are the true protagonists of the landscape.