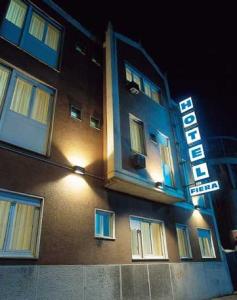 Fiera Hotel is a small welcoming structure, offering comfortable accommodation and convenient facilities to make your stay in Milan a pleasant one.

Location
Fiera Hotel Milan is located in front of the Porta Spinola entrance to Polo Urbano and at 8 metro stops from Nuovo Polo. The hotel has a privileged position to access the exhibition and congresses that are held in the very large area of Largo Domodossola.

Rooms
The hotel has 29 rooms that are equipped with basic amenities for enjoying a perfectly serene stay. With a sober, pleasant decor and a handy desk, the rooms are very bright and quiet.

Restaurant
The bar and breakfast room offer very generous buffet breakfast, with a wide selection from the Italian and European tradition and an assortment of fruit juices and coffee.

General
There is a lounge room, which is common to all, providing a quiet inner garden inviting guests to relax. Favourable parking facilities are also available on the hotel's premises.