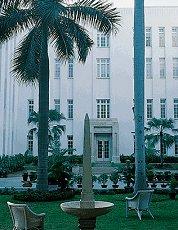 Imperial Hotel New Delhi is located on the prestigious Queen's Way, in Janpath. It is a stone's throw away from Connaught Place, fashionable shopping market and premium business district of New Delhi. Guests can visit numerous places such as the President's Palace, the Parliament House, National Museum, National Gallery of Modern Art, the Dolls Museum and many others. The hotel is divided into four wings and has 263 beautifully appointed guest rooms and suites, well equipped with en suite facilities.
The Imperial houses some of the finest restaurants in New Delhi, which offer a fine dining experience to suit any occasion. The Patiala Peg with its stock of fine wines and liquors offers the perfect setting to relax after a hard day's work. The vast ballroom serves as a venue for lavish parties with a sitting capacity of 500 guests. Also available are two mid-sized conference rooms and three exclusive meeting rooms.