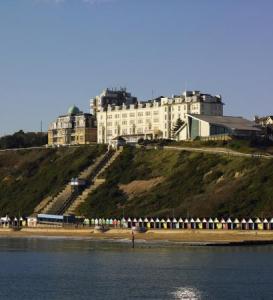 Located adjacent to the Bournemouth International Centre, Marriott Highcliff Hotel Bournemouth is close to the Beach & Pier, Compton Acres and IMAX Cinema. Guests can relax in any one of the 138 comfortable guestrooms, each equipped with remote-control TV, phones with voice mail and multiple data ports. Bedrooms have air conditioning and as the hotel is fabulously situated overlooking the sea, they also offer amazing sea view rooms.
The on site restaurant serves a wide variety of international delicacies accompanied by a list of cocktails to choose from. During the summer month's guests can relax on the panoramic sun terrace or enjoy a BBQ by the heated outdoor pool. Throughout the year, the leisure club offers a large indoor heated pool, spa, sauna, steam room and fitness area.