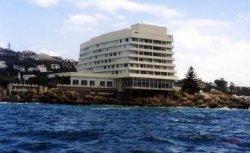 The Beacon Island Hotel at Plettenberg Bay is truly a world-famous landmark and one of the most sought-after holiday destinations. Plettenberg Bay embraces one of the most beautiful sweeps of coastal scenery in South Africa. With its breathtaking backdrop of the Outeniqua and Tsitsikamma mountain ranges, it is protected on one side by the Robberg Nature Reserve, which juts into the sea. This area is also awash with river and lagoons, indigenous forests and bounded by long sandy beaches stretching east and west. Built on a rocky promontory jutting into the warm Indian Ocean, Beacon Island's setting remains unsurpassed. The hotel attracts a diverse group of guests - from the newly-weds, who have chosen this romantic spot for their honeymoons, to families who really appreciate the children's special entertainment programme that the hotel operates during the season, to keen sports enthusiasts and, of course, international tourists.
The hotel has 192 double rooms and 8 suites (sea facing).Most of the tastefully decorated rooms and suites overlook the sea or lagoon, and have every modern comfort.
The hotel has three excellent restaurants, two swimming pools - one outdoor and one heated indoor - a separate sauna for ladies and gents, floodlit tennis courts, water-skiing, scuba diving, volleyball, table tennis and squash.
The hotel is designed for pure relaxation and is the perfect holiday destination, attracting visitors from all over the world.