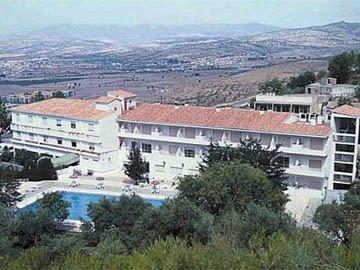 Location
Situated 2 kilometres from the city centre in the Albayzin area and close to the University of Granada-Cartuja and 10 minutes drive to the Triunfo Gardens and the Gran Via.

Rooms
Rooms are simply decorated and all come with air conditioning, TV, and basic bathroom.

Restaurant
Located on the ground floor and serves International cuisine a la carte.

General
This is an ideal hotel for those not wishing to be right in the heart of Granada but not too far away at the same time. Hotel is located in very picturesque surroundings with gardens nearby and looks over the city of Granada. Hotel also has a swimming pool which is almost olympic size.