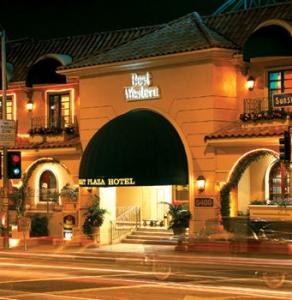 Best Western Sunset Plaza Hotel is situated in the heart of West Hollywood on the legendary Sunset Strip. The hotel is close to the landmark art deco Argyle, Comedy Club and the Beverly Hills with its world famous restaurants and exciting shops along Rodeo Drive. The property is also minutes away from the Universal Studios, trendy Melrose Avenue, Century City, the Marina, Santa Monica, Bel Air and the new Getty Museum.
The hotel boasts 100 guestrooms that are comfortable, well furnished and equipped with contemporary amenities. Conference facilities are available for people on business travel, accommodating up to 55 delegates. During leisure, you can simply laze around the outdoor swimming pool.