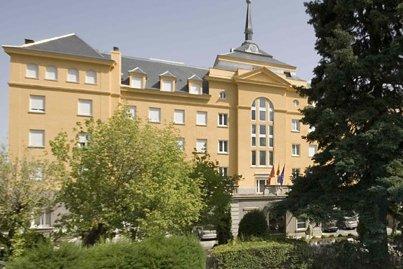 Location
Victoria Palace Hotel is located at the Royal Site of San Lorenzo de El Escorial. The hotel is situated 200 metres off the Monastery, which is considered as one of the World's architectural wonders. In the vicinity, you will find a 18-hole Golf Club, called La Herreria, as well as tennis and paddle courts.

Rooms
The hotel has 87 rooms that are decorated in a classical style, well furnished and equipped with standard amenities.

Restaurant
One of the hotel's attractions is its quality Gastronomy. A wide variety of good Spanish regional dishes are offered daily. In addition, the on-site pleasant English style bar is the main meeting point for guests.

General
The interior decoration and the noble areas of traditional style, will give you a pleasant feeling of comfort. The magnificent hotel's halls are well equipped for the celebration of all types of events like meetings, congresses, conventions and courses. Recreational facilities include an outdoor swimming pool with a solarium.