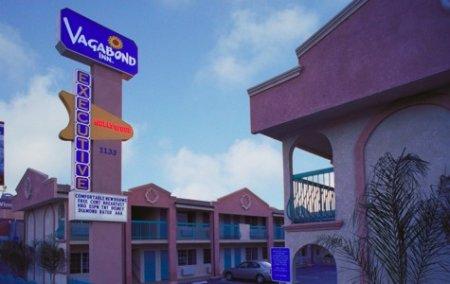 Vagabond Inn Executive Hollywood is located near all of Hollywood''s best attractions. Within a half mile, you''ll find the Walk of Fame, Mann''s Chinese Theater, the Wax Museum, Pantages Theater and Paramount Studios. Make your stay in Hollywood memorable and save with our convenient Universal Studios packages. We are a mere 2.5 miles from the theme park, with the Sunset Strip, Beverly Hills, West Hollywood, Downtown LA, Staples and the Convention Centers just a short drive away. We offer business travelers Business Friendly rooms with ample work space, larger TV with remote, desk lamp with additional outlet and dual-line telephones with a dataport for Internet access. After a busy day, unwind in our heated pool and take advantage of the satellite TV, featuring premium channels like HBO and the Disney Channel. Whether you stay with us for business or pleasure, we''ll serve you with our own brand of Western Hospitality. Good value, friendly people- it''s how we do things.