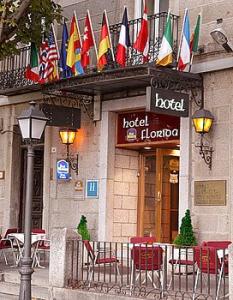 Featuring a graceful decor and a warm hospitality, Best Western Florida Hotel welcomes you for an unforgettable vacation.

Location
The Best Western Hotel Florida Hotel San Lorenzo del Escorial is located in front of the historical Monastery, considered the eighth marvel that was founded by King Felipe II. This hotel is endowed with a wide variety of services and is decorated in the typical style of the area. The Galeria Floridablanca, Colised Carlos III, Golf Field La Herreria, R.C.U. Ma Cristina and Parque De Terreros Park are some of the local attractions that are within walking distance.

Rooms
The hotel offers 50 air-conditioning guestrooms that are complete with bathrooms, piped music, satellite television and some have a view of the monastery.

Restaurant
The on site restaurant serves a wide variety of international delicacies. The onsite cafe is a cosy place, which serves some of the finest Spanish dishes.

General
This property also features meeting rooms that can accommodate up to 500 guests for various events.