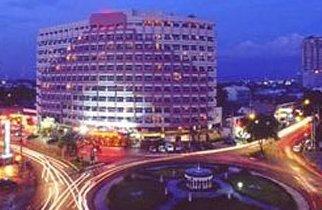 Imperial Palace Suites is located in the Quezon City and is 5 kilometres from Concert halls and golf course. Tourist attractions include the art galleries, Intramuros, Cultural Centre of the Philippines, Museo Pambata, Karaoke and Videoke venues as well as the Cuneta Astrodome. Imperial provides 140 well-appointed guestrooms with living, dining and kitchen facilities.
Guests can relish international cuisine at the on site restaurant. In addition, a business centre and conference facilities are also provided for your business needs. You can work out at the gymnasium or take a relaxing massage at the hotel.