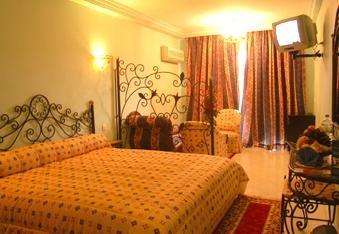 Location
Located minutes away from Marrakech world-class golfing facilities and the Menara Airport, the Imperial Holiday Hotel is your entrance door to downtown Marrakech, the Red Pearl of Morocco.

Rooms
Guests are offered a choice of 114 air-conditioned bedrooms that are equipped with all the necessarya enmities.

Restaurant
The onsite restaurant offers you a delicious menu and a la carte dishes in a prestigious and charming ambiance. After a beneficial sun top cool in the The Niagara Falls Snack-bar, savour the delicious grills.

For your conferences, congress, incentives and meetings, accomodatiing 300 plus two under commission room's, 20 people, each is available at the hotel. Under a blue sky illuminated with a radiant soliel, relax at the edge of the private swimming pool. Fitness club equipped with the high technology of materials and a sauna are also provided at the Imperial Holiday.