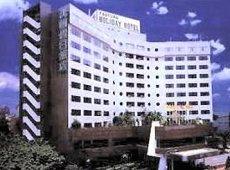 The Taoyuan Holiday Hotel is located in the city centre and is a convenient 20-minute drive from the CKS International Airport, while the train station is only 4 kilometres away. The hotel offers comfortable and tastefully furnished guest rooms equipped with modern amenities. The onsite restaurant serves a wide range of international cuisine for you to feast on. Guests can also make use of the recreational facilities that include gymnasium, swimming pool, sauna and table tennis.