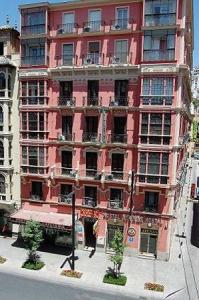 If you are planning for an ideal holiday destination in Granada and Province, the Atenas Hostal is a perfect place for you to reside and explore the surrounding areas.

Location
The Atenas Hostal is located in the heart of Granada within the historical centre. The property is situated in an emblematic building that dates from year 1950.

Rooms
The property boasts 77 air-conditioned guestrooms that are well furnished and equipped with modern amenities to make your stay a pleasant one.

General
The lobby is a perfect place to relax and meet friends or business delegates. Guests arriving with their own transportation can avail of the convenient parking facility on-site.