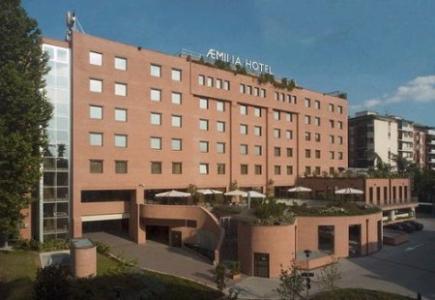 With its high standard services and comfortable accommodation, this four star hotel makes an ideal place for guests to stay for business or leisure.

Location
Located in the city centre, Golden Tulip Aemilia Hotel is just 10 minute-walk from Bologna's main square, Piazza Maggiore. The hotel has an easy and comfortable access to the International District Exhibition, the main Central railway station and Guglielmo Marconi Airport of Bologna.

Rooms
The hotel has 124 spacious and comfortable rooms that provide the right kind of atmosphere to make your stay even more relaxing and joyful. Specially adapted rooms for the physically challenged are also available.

Restaurant
The on-site excellent restaurant is the place where you can enjoy typical local or international dishes. The Wine Bar creates the right atmosphere to end your day with an Italian wines along with a company or alone.

General
A well-equipped 4 meeting rooms is available for people travelling on business matters. The hotel also has a marvellous roof garden where you can enjoy the wonderful view over the charming city of Bologna and spend a memorable evening.