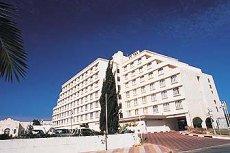 Located in the most scenic part of Ashkelon, right on the Mediterranean, the Dan Gardens Hotel offers everything for a totally relaxing vacation. The hotel is surrounded by acres of private gardens, with the new marina, fascinating archaeological sites and a wealth of touring options to explore.
Dan Gardens is fully air conditioned and features 248 well equipped guest rooms including 4 splendid suites. Enjoy delicious dishes served at the on-site restaurants and you can also relish various drinks at the Espresso Bar or the Lounge Bar. Wide selections of outdoor and indoor settings for corporate and family celebrations are also at your disposal.