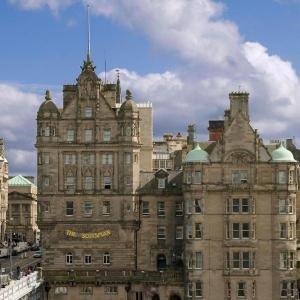 Located on Edinburgh's historical North Bridge, The Scotsman has been converted from the Scotsman Newspaper's baronial offices into one of the most stylish hotels in the city. Conveniently situated next to the Waverley Railway Station, the property is just a minute's stroll from both Princes Street and the Royal Mile. The hotel brings together the efficiency of the 21st Century with careful to innovative design but most of all huge comfort and the very best of Scottish hospitality.
The 56 bedrooms and 13 suites at the Scotsman are unique and designed to provide comfort and convenience. There are two restaurants and a choice of bars at the onsite, offering a fun atmosphere, serious food and fine drinks. In addition, the conference facilities range from the state of the art screening-room, seating up to 46 people to the Linklater suite, for up to 180 guests. Further more, a 16-metre stainless steel pool, as well as the spa area is an ideal place to relax and refresh the body and mind.