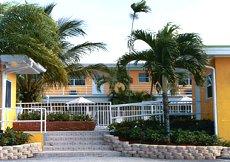 The White Sands Inn is located at the North end of the beach in Hollywood and just a few minutes drive from the North of Miami Beach. It resides on a privileged position, just footsteps away from the ocean, thus creating a wonderful ambience all through its surrounding.
In addition to the beautiful interiors, this hotel also highlights neatly set-up rooms equipped with all modern amenities. The quite and serene atmosphere of the hotel makes itself an ideal destination for people to come across a wonderful experience, which can never be forgotten.