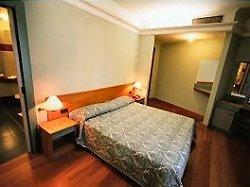 The Enrichetta Hotel Desenzano del Garda is located opposite to one of the most beautiful beaches of the city. Elegance, comfort, utmost privacy and the charm of Lake Garda are the prime features of this hotel. Enrichetta Hotel is considered to be an ideal point of reference for travellers who wish to rest in close contact with nature. Guests have a choice of comfortable and air-conditioned bedrooms that are facilitated with a host of modern amenities.
You can dine at the onsite Il Latino Restaurant and later enjoy a refreshing drink at the cocktail bar. The Enrichetta Hotel puts at your disposal several facilities that include jacuzzi and a solarium with beautiful views of the lake.