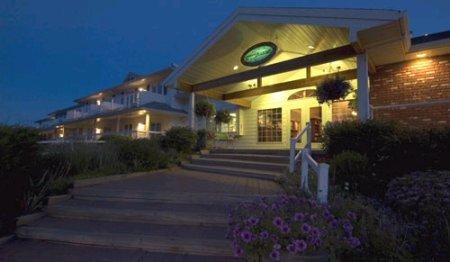 South Thompson Inn Guest Ranch and Conference Centre is quietly nestled on 55 acres, stretching from shores of the South Thompson River to the foothills of the Rocky Mountains. Just 15 minutes east of Kamloops and four hours from Vancouver with horseback riding and golf, the property is an ideal place for corporate retreats, golf getaways and individual escapes. The Inn has an appropriate mix of tasteful design and business practicality.
Accommodation consisting of 57 tastefully appointed and individually decorated guest rooms, at the Inn, Manor House and the Stable Suites are named after the racehorses, racetracks and Kentucky cities. Guests can relish a gourmet meal at the dining room and an after dinner drink at the deck, while watching the sunset. The conference centre is an unexpected corporate surprise in the midst of the tranquillity with ten functional meeting rooms, accommodating up to 200 people.