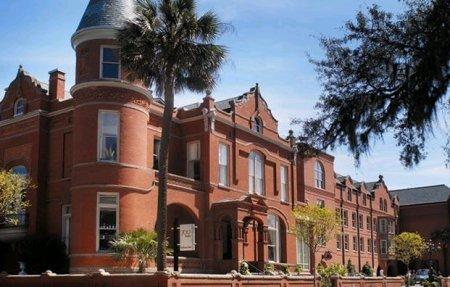 Location
Overlooking the historic Forsyth Park, the Mansion on Forsyth Park Savannah incorporates the exterior architecture and design of an original 18,000 square feet Victorian Georgian Mansion. Located within the historic district of sultry Savannah, this luxury destination is groomed to perfection and polished for the enjoyment of today's guest.

Rooms
Capturing the historic elegance of the original 19th century mansion around which it was built, the Mansion on Forsyth Park features 126 lavish guest suites with magnificent furnishings and residential comforts. The rooms at this property are adorned like a contemporary jewel with fashion, culture and opulent style indicative of very chic and elegant hotel experience.

Restaurant
Located within the new, chic and luxurious Mansion on Forsyth Park, 700 Drayton Restaurant is home to Savannah's most eclectic, talked-about dining experience. A relaxing and vibrant cocktail lounge invites you to meet, eat and enjoy with your friends or business delegates.

General
For social and corporate events from 5 to 275, the Mansion on Forsyth Park adorns its meeting facilities. Versatile function space includes a ballroom, permanent boardroom, and high-speed Internet access. During leisure, guests can enjoy the benefits of taking a swim in courtyard pool and enhancing the day with a spa treatment.