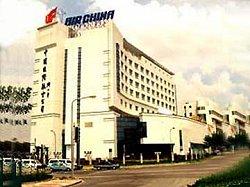 Location
The Air China Hotel Shanghai is conveniently located at the exit of Shanghai Hongqiao Airport and is only 18 kilometres from the Shanghai Railway Station.

Rooms
This airport hotel boasts spacious guestrooms and suites that are pleasantly furnished and well-appointed with the basic facilities. Attentive room service is also available for your conveniences.

Restaurant
Guests have a choice of 10 restaurants that serve scrumptious delicacies from all over the world, while the Pheonix Restaurant offers delicious Chinese cuisine. The lobby bar is an ideal place to unwind in a graceful atmosphere after a tiring day.

General
This property also features multi-function halls that are ideal for your business and social gatherings. During leisure, you can play a game of billiards or get entertained at the karaoke room or dancing hall.