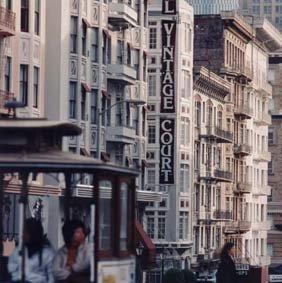 Executive Hotel Vintage Court is in the heart of downtown San Francisco on Nob Hill, two blocks from the Financial District, Union Square, Chinatown, and Theatre District. This charming San Francisco boutique hotel is convenient to shopping, restaurants and the Moscone Convention Center--beloved by leisure and business travellers alike.
Reflecting the warmth and hospitality of the nearby wine country, each of the hotel's 107 features elegant furnishings and fabrics. Adjacent to Executive Hotel Vintage Court is the internationally acclaimed Masa's restaurant. The hotel also has a Private Boardroom for your executive-level meeting or personal event.