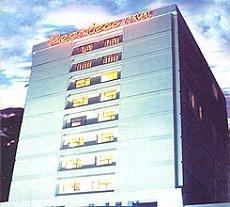 The Peerless Inn is located in Kolkata's choicest city centre and close to both shopping and business areas. The hotel is just 100 metres from the Esplanade Metro Station and 10-minute walk to Eden Gardens, New Market as well as 15-minute to the Victoria Memorial. All 122 guestrooms are well furnished and equipped with modern amenities like air conditioning, satellite TV, mini bar and others.
The hotel offers a banquet and conference room with a splendid view of the city skyline with maximum capacity of 40 guests. Stay fit on your trip and try a relaxing work out at the multi gym. You can also dine at the restaurant, which serves Chinese, continental and Indian cuisine.