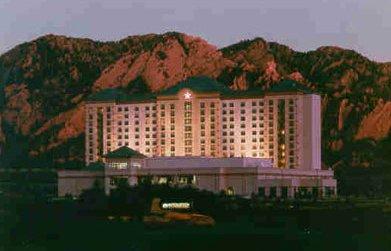 Nestled against the backdrop of the Rocky Mountains, the year-round resort, Omni Hotel Denver, offers a wealth of activities located right on the premises. Golfers will love the challenging 27-hole championship golf, with its striking scenery and more than 400 feet of elevation changes. Whether it is the stunning panoramic views of the mountains or valley, the luxuries of the full-service spa and golf course, or the essence of snow-capped mountain tranquillity, you are sure to be swept away. The Omni Hotel welcomes you to a retreat into modern luxury. Relax among exquisite appointments in one of the 390 deluxe guestrooms or suites, complete with custom bedding, refined furnishings and tile baths. Outside your window are awe-inspiring views of the snow-capped Rockies or lush green valleys.
Grand dining with a view, cosy cocktails or pub grub, you will find all the wonderful food and drinks your heart desires at this Omni. There are 14 meeting rooms with more than 34000 square feet of function space available, including the grand Interlocken Ballroom. Finally, indulge yourself with massage, soothing facials or invigorating body treatments at the Omni Interlocken Spa.