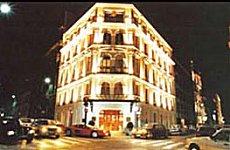 Location
The hotel is located in a very quiet street, right in the centre of the Champs Elysees district, a few steps from the Avenue Georges V, privileged centre of business, entertainment, shopping and high fashion.

Rooms
The rooms are of medium size and in good condition. They are furnished and decorated in the style of Louis XV or First Empire. Most bedrooms feature a different color scheme. The bathrooms are generally small and decorated with black polished stone. Large parts of the walls are mirrored. All rooms feature a hifi system.

Restaurant
the breakfast room is located in the basement. It is also very well decorated and has a pleasant atmosphere. The bar is follows on from the reception. It is of a good size and like the lobby the walls are entirely covered with wood. It features a grand piano and an open fireplace. This is a ideal place to relax in comfort.

General
This is a 4 star hotel considered as a first class property, which is ideally located in Paris. The hotel offers comfort and it is ideal for both business and travel.