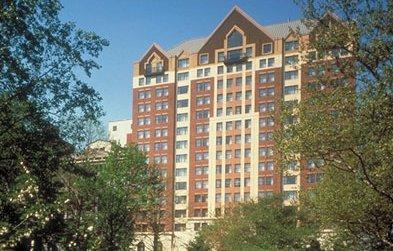 Overlooking Independence National Historic Park and surrounded by Philadelphia's Society Hill, stands this four-diamond Omni Hotel at Independence Park. This is European-style luxury at its best, all within walking distance of the Liberty Bell, U.S. Mint, Independence Hall and the Benjamin Franklin House. Sophistication and charm combine to project a classic presence both inside and out at the Omni Hotel at Independence Park. All of the 150 spacious guest rooms are the ultimate refuge. All the accommodation units are equipped with modern amenities.
Enjoy a sumptuous dinner or lull over Sunday brunch in the relaxing atmosphere of Azalea, or unwind with a cocktail at the Lobby Lounge. The Azalea Restaurant is a fine dining restaurant that overlooks Independence Park, serving delectable American regional cuisine for breakfast, lunch and dinner. 24-hour guest room dining is also available if you choose to enjoy delicious cuisine in the privacy of your room. The hotel is an ideal location for all your wedding celebration needs, from engagement parties, bridal showers and rehearsal dinners, to the perfect intimate wedding reception and farewell brunch.