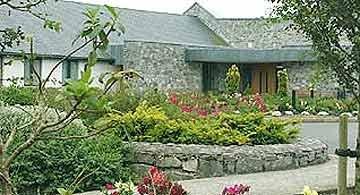 Just minutes from Knock Shrine, Knock House Hotel Mayo County is ideally located in the heart of the countryside. Featuring a warm hospitality and great comfort, the architecturally designed Knock House curves naturally in its surroundings and provides a perfect setting for a relaxing break. It provides excellent accommodation with 68 unique and spacious bedrooms that are modernly equipped. The onsite Four Seasons Restaurant is open all day and serves an excellent selection of delicious freshly prepared dishes. You can also relax with a snack at the magnificent foyer, which features a glazed area that offers sweeping views over the rolling countryside. Knock House is a perfect setting for conferences with 3 spacious meeting rooms available.